Yayoi Kusama: I Love Me (2009) - Directed by Takako Matsumoto


(I saw this in a theatre at the Jewish Community Center in Toronto. It was part of Reel Artists – a small festival of movies about artists. My artist friend Shary Boyle had invited me to go. We sat together on a small row of seats. When one person moved in their seat - everybody moved in their seats.) 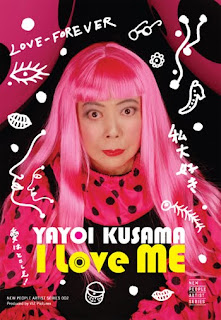 The documentary follows Yayoi Kusama around for a few years. Most of the time, she seems to be 77. Kusama is a successful artist who lives in Japan. When the office of the Emperor of Japan called, they asked if she would prefer being described as an abstract artist or an avant-garde artist when she received the Emperor's award for her contributions to the world - she prefers avant-garde. As blogger Oh, Carlos. says of her work - “Installation art done right. Even the most art-tarded person could walk into one of her rooms and feel something.”

It wasn’t till I arrived at the community center that I remembered having torn out an image of hers from an art magazine a long time ago – an advertisement from an art show without the title of the individual work. At the time, I worked and lived alone in a bachelor apartment. I didn’t have so many art friends back then. I always hated having little pictures of any kind around when I worked, but this image was helpful somehow. I taped it up above my sink. 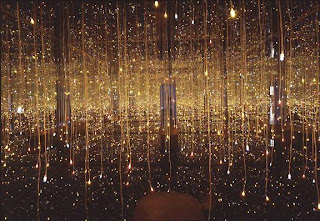 Takako Matsumoto, the director of "Yayoi Kusama: I Love Me," stood up before the screening and explained that critical reviews of Kusama's work focus too much on her mental health issues, and that she had worked to avoid that problem. Unfortunately, the movie that followed also avoided a rigorous investigation into the more nuanced successes of Kusama’s work.

Mainly, Matsumoto's documentary follows Kusama around watching her paint and listening to her talk about her success. I can understand how this happened, she is a really compelling person to watch (I could barely focus on anyone else’s face in the movie and it’s not just because of her multi-coloured wigs or her cold stare that warmly reminded me of my grandmother.)

So by default, this movie ends up being a casual study of narcissism. It reminded me of that old joke - “what came first? The 60s avant-garde or the narcissist?” Kusama does not attempt to cover up her own narcissism in any way so it was not uncomfortable to witness as she seems to get very little pleasure from anything else. Her self-championing and self-branding seem integral to the success she has received from the art world and are by no means unusual or out of place there.

Avant-garde art started out as an understanding that radically new or politically critical work was often misunderstood and rejected by established art institutions. So along with this concept were contempt for conformity, commercial success and suspicion of established art institutions - though things got complicated. Around the 60s and 70s, many self described avant-garde artists weren't as afraid of being in the museums (as they became more embraced by them) as they were of being derivative. Creating something wholly original in the world became a primary goal.

There is a hope within this form that an individual’s originality will create the next part of the solid line of art history or human history. In retrospect, it is hard not to see all these individual attempts at originality forming the small new branches on a tree rather than a solid time-based line pointing to the future. The younger generation of artists are still interested in creating something new, but I think that they are not as afraid of being a part of the world in order to do this. Hopefully that means that some of them will succeed in talking about the heart of the tree rather than reaching as far away from the trunk as possible.

And though Kusama shares this interest of being wholly unique (and profits from the critical and commercial success that being "wholly unique" now occasional provides), her work betrays a longing for the whole of the world and a longing to escape this rigorous individuality and its isolating narcissism. Her art often shows a space filled with a seemingly infinite number of repeated and harmoniously similar objects (occasionally referred to in her titles as “souls” or “fireflies".) It’s unusual to have images that allow you to think warmly and pleasurably of the infinite universe without including a fear of it. The effect is closer to a unity that is complicated and freeing rather than fascist. Maybe this is why she is still making work that looks so contemporary and not like the work from 40 years ago. New is still good right?

At one point while painting, Kusama talks about being surprised when she had first sold a painting for 1.6 million dollars. “Did that make you happy?” the documentarian asks from behind the camera. “Yes, it was nice” Kusama responds, “It is nicer to make a new world… but it is Ok.”

Posted by Margaux Williamson at 2:23 PM

Labels: avant-garde, the 60s, Yayoi Kusama: I Love Me