( I first saw Ryan Trecartin's I-Be AREA in 2007, with my friends Sheila Heti and Martha Sharpe, projected on a large wall in a small gallery. We began watching half way through and then watched the beginning last. It was one of the best things I had seen in a long time. I had also seen slightly earlier work of his before 2007 on Youtube and a few other places. The curators Jon Davies, who has screened Trecartin's videos here in Toronto before, and Helena Reckitt recently initiated a show of Trecartin's work that opens this week at The Power Plant contemporary art gallery. I watched I-Be Area again from start to finish on ubuweb a few nights ago on a computer in my studio. I wanted to watch it again before I saw the new work.) 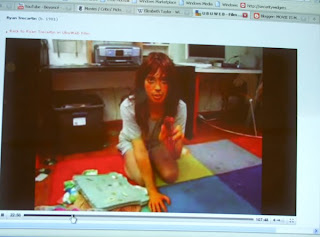 I-Be AREA makes it look like addressing the most difficult of difficult-to-address-subjects is easy and fun: persona, authenticity, the neediness one can have for people who know you (mothers), the rebellion against people who think they know you (mothers), personality as a constant audition, the importance of production companies, etc. There are buildings and cornfields and living rooms and bedrooms. And every place is a performance space connected to other spaces through cameras and cell phones (or hands in the shape of cell phones). There is a collective of mothers, who have a preference for girl children and adoption. They run a bead store.

Here, the characters' bodies know the value of art in the age of reproduction. You don’t even need to take a picture, or stack Campbell's soup cans; you just have to repeat your own words immediately after you say them in order to make something that feels as special as a copy. No one is a bad actor because, here, life is a performance so how could anyone go wrong? The words (written by Trecartin) are full of jokes and a strange kind of clarity. The movie is somewhere between narrative poetry and an intense art experience. I will paste some of the words here since we are in a word medium right now.

PASTA: I’m in pain, serious pain. Charity, when I was your age, basically, I don’t like your name.
CHARITY: WHAT?!
AMANDA: I like the name Charity.
SEN-TEEN: Ok whatever AmanDUH
PASTA: and I understand this, I do. I changed my name from Uri Anderson Sommerset to Pasta when I was your age. And it was the best decision of my life. I think you need to think about this. This was way back at the end of the millennium.
SEN-TEEN: (pointing at Pasta) you should look up to this person.
PASTA: and not just because your short
CHARITY: whatever.

I-Be AREA might be hard to take for some people at first viewing; though it is generously narrative and incredibly entertaining for an art movie, the multi-coloured high speed spectrum whirling on screen can feel like one is choking on art because IT IS SO MUCH ART. But inside the jittering play group, there are laws and order and trials and battles and meaning and searches for meaning.

Parent: Laurie, you have a look on your face, tell me what the words are.

The main stage of I-Be AREA is the present. The present can be weird and fascinating. The present often makes people nervous and sometimes it takes a while to figure out how to talk about the new structures found there. For instance we all know that, with the help of new technologies, people now both have an amazingly increased capacity to adopt or develop new identities but also have a hugely increased burden of having the banal, shameful or glorious evidence of their pasts linger within these technologies.

No matter how old or young, we all have this problem-blessing of increased self-awareness, a problem-blessing that increases in intensity for each new generation year. We don’t just have tall tales about our shameful pasts, we have growing piles of hard evidence. We can’t roam around North America like the burdenless psychopathic families of the 90s, always in a new city with nearly a blank past. If we want to change, we have to change publicly – in front of our constructed families and in front of our anonymous audiences of 2 or more.

In I-Be AREA, adopting a new identity is as easy as pushing a button; but transitioning into this new person can be an incredibly vulnerable process - people have to change in front of the mocking eyes of their old friends, paid employees and anonymous audiences. The word “poser” is used a lot in I-Be AREA. Poser still has a negative connotation but is contrasted with the more positive “Pose!” – the more positive side of the successfully affected identity.

I-BE: ok, listen, my second dilemma – the same as the first. Ok part 2. Ok look. I wrote a letter to my future self
JAMY: just cause your original is having a complete human change meltdown makeover
CHEETA: just cause your creativity don’t mean you have to memorize
JAMY: yeah poser, play yourself a full side
I-BE: it’s called a clean slate, Jamy, Cheeta.
CHEETA: I-Be, I don’t understand how this is supposed to represent a minimal situation (holding a piece of blank paper)
CHEETA: I-Be
I-BE: put it in a bottle
I-BE: 30 years from now, when I’m walking on the beach and a perfect wave comes and hits me in the face with my bottle, and I open this letter back up – I want to see nothing. I want to look back on this like I’d just been born. (WISTFULLY)
JAMY: yeah.. I see a face in it (looking at the paper)
CHEETA: 30 years from now when you’re sitting on the beach, you’re going to looking at this dude’s face.
I-BE: well.. today is the day that I’m going to start over.
JAMY: you’re such a wasteful production man I-Be
CHEETA: yeah, you’re always trying to make things sound more special, and digital and non linear than they are and it’s stupid. (Jamy nods)
I-BE: I’m a fucking clone you piece of shit head. You exists cause some fag got a pregnancy implant. I exist cause of “command V”, copy and paste some guys dna. OH! So I’m allowed to feel like a digital girl in my world…. I live in it! It’s mE!

The good news is there is no more hiding of change – so we all have a better understanding that it is a thing that humans have to do. The idea of an “original” that never changes or grows seems less ideal than puritanical - a little freakish and a lot oppressive. We also understand that combined with these new self-generated "I"s are the other "I" realities created by different people - people shooting our actions, writing our stories, taking our pictures. This makes for a lot of different “I’s” – some with meaning, some without. It is never so obvious which ones have meaning and it can be a little confusing when they run into each other.

CHEETA: I just watched the living room channel, I thought you were going to fuck some shit up
I-BE: what?
I-BE: I told you what I’d be like
JAMY: yeah I-BE you was like a puppy
I-BE: yup. I saw myself. But it was a lie. They was lying. You think I don’t know me, but I do
I-BE: look I think I just saw a highly advanced 3d text message of my future self giving me the middle finger. Now I’m going to fuck right back in his face.
JAMY: you’re totally paranoid.
I-BE: listen. I know what my original wants to look like, and I can’t believe he tried to reverse-physcho me into that person – I mean, he looks cool ..and I like him.. and I would probably be him… but I know that’s not my original and I know he’s somewhere laughing

This incredibly intense new combination of freedom from identity/ burden of identity can’t help but work itself out. People are brilliant at working things out for themselves, even young people.

And along with the increased self-awareness in an increased awareness of others. With this increased empathy, there is less of a need to run away. We are all here, even if we are brand new today.

MAYFLY: (petting a cat and holding a glass of wine) Oh my god she loves me! (referring to one of her twin daughters)
PASTA: (mournfully) of course she does Mayflie, she’s not an alien. They’re both not aliens, you give her shelter sometimes.

JAMY: I just feel bad cause nothing he does makes sense.
CHEETA: nothing adds up
I-BE: have ya’ll been downstairs lately?
I-BE: it looked different
JAMY: yeah, it looked weird right?
I-BE: I think that they had a 70s filter on a very low percentage, cause it reminded me of all the memories that I hate from that decade
CHEETA: you wasn’t alive back then, I know
I-BE: I said memory Cheeta!
JAMY: it’s not a filter it’s called Linda, a hidden decade from the present.
I-BE: Listen, quit explaining shit to me to me Jamy, you think I don’t know about all the decades they be hiding. They must have slipped me some computer pills or some shit because I had no control
CHEETA: I-BE, I can’t translate your rants, what the hell you mean?
I-BE: buy my rosetta stone.

Posted by Margaux Williamson at 11:18 AM