Up in the Air (2009) - Directed by Jason Reitman, based on a book of the same name by Walter Kirn

This movie is about people who are adrift in the world. On one side are people who choose to fly away from the banality and pain of real life by avoiding complicated feelings and confining situations. On the other side are those people who are pushed off cliffs by someone who is whispering "fly! fly!" behind them.

Our main man who chooses to fly is played by George Clooney, star employee of a "We'll Fire Your Employees For You!" company. He is the one pushing the adrift but-not-by-choice people off the cliff. 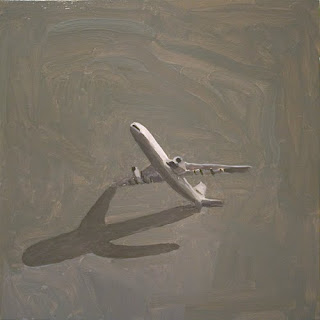 Our man, who chooses to fly around in the air and not to be tied to a small piece of ground, still wants some good things from all over the ground – like dinner, a bit of respect, sex. To acquire those things, he does have to work for his ground money. Also, it helps that he looks like a grown-up. And though the thrills for him are pretty standardized, the living is good. The only real down side is that if one is safe from the pettiness of life (and the pettiness of other people's lives), one also tends to be safe from its surprises. So though our man travels all over America to fire people, we always feel like we're in the same place.

In a more obviously Hollywood movie, The George Clooney character would learn (with the help of a *very* special woman) to brave the treacherous and banal earthly ground for its sweet, sweet fruit.

But in this movie, there is a surprising and poetic turn of events. George Clooney's character turns out to be really, really good at flying around America and pushing people off of cliffs while whispering "fly! fly!" behind them. He's good at it because he kind-of means it. He kind-of believes there is always something better around the next corner, even for these people who look so sad. To these people he says - Why humbly tie ourselves to these small sections of the ground when we might become these great people around the next corner?

Real life tempts our man only once. When this happens he is tempted to rethink his philosophy. At this point, the firing sessions become almost unbearable to watch. With real life clouding his fantasies, he can only offer empathy for these people (who might possibly be having the worst day of their lives) and not very much of that special other-worldly-optimism.

The firings represented in "Up in the Air" are painfully realistic. Having non-actors talk about their real and recent lay off troubles while opposite a movie star (known for his "up in the air" quality) creates a very quiet but heartbreaking fairytale loop. The two different kinds of "adrift" continuously work unsuccessfully to resolve themselves or understand each other. They form a kind of American wrestling match in the air - either going up or going down (mostly going down). Some of the movie is heavy handed, but this part is interesting and beautiful.

After our man is tempted by real life, and then, after real life disappoints, he returns to his original star employee position at "We'll Fire People For You!". The last scene shows him alone, a little worse for wear, looking up at the departure board at an airport.

We're not sure if he still believes in flying - if he will still be able to make the lost people's worst days a little easier or at least a little more surreal with his other-worldly optimism that his faith in flying helps to ensure - but we know he still has to fly because he doesn't really know what else to do. Because we know this, we are kind of hoping that he is saying something crazily optimistic and reassuring to himself while he stands there alone at the gates of his familiar and well-worn home.
Posted by Margaux Williamson at 1:07 PM

Labels: brave just once, nepotism charges suck it up, Peter Pan, Up in the Air