The Headless Woman (2008) - written and directed by Lucrecia Martel


(I rented this at the video store down the street. It was near the cash and the title "The Headless Woman”, a title that ran over a silhouette of a woman’s head with a mass of bleached curls, always caught my eye. One would think that they wouldn’t show a head for the idea of a headless woman. But I am a bit heavy on the side of wanting my metaphors to be literal. And what other visual are they going to show? I ask myself. A toilet? A handbag? I am also always a little more inclined to select a movie if I think the movie is about a group structure or a system rather than an individual character. For instance, if the Dvd cover said “The Headless Women” and had a line drawing of a gold star on it, I probably would have rented it 7 months ago when I first saw it there. And if the image was a photographic image of a woman's whole face, it would have taken me longer.) 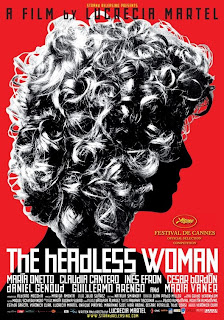 Verónica, a dentist, is the main character. It is her bleached head of curls on the box cover. The only golden head in the movie. Early on, Verónica makes a careless mistake and runs over something while driving her car. It is unclear to us what she has run over. Though shaken and having hit her head, she doesn’t investigate or look back. A thunder storm begins and we continue to follow her for the rest of the movie.

It becomes more crazy-making when his ideas are carried through in actions - actions taken within a society that doesn't know anything about his private new moral constitution. For instance, his collective society would have probably said it was ok to kill some young men ( in a war let's say) but it would probably have taken about a hundred years of argument for them to agree collectively that the world would be a better place if Raskolnikov killed the mean lady down the street. It is hard to remain sane while rigorously keeping up your mind's secret moral constitution. It is hard to be the only one around to argue over the validity of these new morals with yourself. Especially when the morals have already translated into actions.

The Headless Woman is the more common, but equally complicated, story of a murderer. Martel’s main character, Verónica, doesn’t need to maintain a rigorous understanding of her own morals because she is fairly trusting of the morals of her community. She barely needs her own head at all - though she starts out with such a seemingly unique one. Unlike Raskolnikov, Verónica becomes more sane after she murders someone. She does not conceal her "mistake" to the dentists and veterinarians. She tells them. They listen, nod, and then, with their collective constitution and societal power, act immediately and discreetly in her favour. The Headless Woman is a machine.

It is not a simple movie. We are given Verónica to empathize with, and empathize we do. We know how easy it is to become a villain like this. We just sometimes forget how horrible this machine can be when it moves along so effortlessly.

In The Headless Woman, Verónica starts out with uniquely bleached blond hair among a sea of rich brown hair. Near the end, maybe out of a new displeasure of standing alone or out of self-protection (we are not sure), she dies her hair back to the standard rich brown of her community. She moves towards the centre of her society's collective moral constitution.

For the last scene of the movie, we watch Verónica’s brown hair and smiling face attend a dinner party with the dentists and veterinarians at an expensive restaurant. The song “Mammy Blue” plays and we hear no other words. Her brown hair and smiling face nestle in comfortably towards the center of the table- she is as far away from questioning the moral borders of her community as she can possibly be. She is right back in the center, safe and sound - barely indecipherable from anyone else in her community. Hers, and her community's, is a crime of banal and collective evil.

After seeing the movie, the cover image now makes me think of the children's horror story of murder, “Mr. Fox”. The story has stayed with me for years, but in a fragmented way. I had always remembered the main refrain “Be bold, be bold, but not too bold or your head will turn to gold” as a young woman kept opening doors that were not to be opened. I just looked it up and I'm completely wrong. The main refrain is “Be bold, be bold, but not too bold, Lest that your heart’s blood should run cold.” In either case, I guess one should be careful about getting too far away from the borders of your society - whatever direction you may be headed.
Posted by Margaux Williamson at 7:32 PM 1 comment:


(It was raining all day and I watched this at home on my TV. My favourite kind of expensive movie involves science fiction fastened to contemporary reality. Though it only received 42 % approval rating on the Tomatometer, that's a number that often works well for me. I always figure that means politics were involved and split the vote. I figured I would like it and I did. After I finished watching it, I watched the good parts again.) 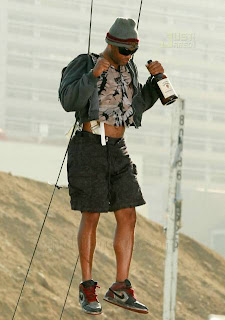 This 2008 movie is a lot like the 1942 movie Casablanca. It focuses on practical altruism and consists of a drunk hero, an angel hero and a good man hero. These characters are compelled towards each other and towards good works. In both centuries, the drunk is upset with the angel for letting him believe for so long that he was alone in the world.

Instead of being in opposition to the Nazis etc., the Hancock characters are in opposition to plain old criminals, to devastating loss in people's private lives, and to the banal evils of pharmaceutical companies. None of these heroes are very interested in public appreciation and all of them are generous in giving the criminals/ outsiders/ pharmaceutical companies a healthy benefit of the doubt before they let their pride or righteousness have a go. The forces of opposition are barely a threat to these super strong characters; so the characters themselves, satisfyingly, become the main force of action and their own worst enemies – struggles among the gods. They are also the primary joke tellers.

In Casablanca, the only way the drunk can become worthy of the angel's love again is to send her away on a plane with the good man while he, the drunk, remains on the ground in the fog. The angel’s love will help the good man make the world a better place. It is a resonating paradox conceived by the sobered drunk to the shock but silent admiration of the angel and to the oblivion but safety of the good man.

Luckily, Hancock is 21st century science fiction and is not so romantic. Here, actions are transparent and choices are made in consensus. The drunk doesn’t send the angel away, the drunk and the angel move away from each other because it turns out they are physically weaker together – less useful and more prone to injury. (We all sort of understand that an angel and a drunk are enormously more of a pain in the ass than an angel and a good man.) It is less of a sacrifice of one’s destiny for the greater good than a reasonable choice for one's own health and happiness. Here, destiny is something that goes on and on and is as predictable as gravity; the choices made against it become the small mysteries. In Hancock, the intimacy of friendship between three people is as compelling and as full of depth as Casablanca's private romantic love between two people.

In Hancock, the good man (who is a public relations man) helps the drunk (who is a superhero) improve his low-on-public-approval image to the city. This accomplishment is achieved early on in the movie. Though this change has useful benefits, for instance the drunk is less of an overt asshole to the people whose lives he is saving and he is also breaking less stuff, it becomes obvious that this is not the main point of the movie. It's pretty obvious from the beginning that he is generally a good person who is just having a hard time in his very long life . We see that the change in public perception doesn't change his heart at all.

That's the thing about being an altruistic asshole - you don't worry so much when your path doesn't correspond to public approval ratings and it doesn't move you so much when it does. We see a group of civilians around the drunk, applauding him for the first time in years after he saves several lives in a bank robbery (a typical act for him) while simultaneously not offending the victims, the police or the public (the new part). He tries to smile in gratitude to the applause, to be decent, but his looks like a smile of an alien trying to blend in on its second day on earth, the inevetiable and unintentional mockery of the human smile. Sometimes a disinterest in public approval is for the best and sometimes it's for the worst, it's always hard to know when to listen and when not to. But it is probably always for the best to try to not break so much stuff along the way.

It's pretty interesting to watch a character in a Hollywood movie undergo the most typical Hollywood character transition, only for us to then be shown how shallow that transition is for the character. But we are just at the halfway point here, we are just getting started. It turns out that it's very moving to see a character like that, this drunk, go after something deeper.

Posted by Margaux Williamson at 9:37 AM 4 comments: