(Though Quentin Tarantino's "Kill Bill" made it clear Tarintino was a master, I wasn’t so excited to see “Inglourious Basterds.” Somehow the advertisements for it seemed like they were trying to trick me into thinking that women were in the movie, and that I would be interested in it. After the high art of "Kill Bill", I thought that this would be more like one of his earlier movies - a break or something. Also, the main premise “violence done to the Nazis who deserve it” seemed like an easy and dumb premise for violence. But I went to see it with my artist friends Amy C Lam and Seth Scriver and my boyfriend Misha Glouberman at Toronto's Rainbow Cinemas on one of the last few days it was playing in the city. The Rainbow Cinemas are special, they are underground and cheap. The screening rooms are like private screening rooms you would find in the Hollywood Hills, but after the 3rd great depression - and maintained with love. Seth brought a giant bag of homemade popcorn. We sat together in a narrow row - the closet people to the screen.) 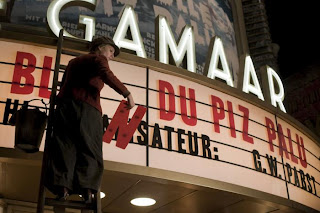 The whole of any movie is made up of many parts: the music choices, the budget, the reason for making the movie in the first place, the audience, the approach, etc. I always think of cynicism in people's work as an easy dismissal or a contempt for one or more of these parts - a lack of faith that all of these parts are valuable and interconnected (however mysterious or seemingly insignificant they may seem.) Even if some of the reasons behind their choices elude the movie-makers, the less cynical directors can speak to this, and not just offer rote or dishonest reasons for their choices.

So with this definition in mind, Tarantino has arrived at the tops of the uncynical director's platform. I believe he could give you all the reasons for his movie-making choices - even if some of those reasons are "because it was beautiful" or "because I could." His choices and his reasons seem at their ecstatic best here, and the movie is remarkable for it. "Inglourious Basterds" seems to come from a place of *crazy wisdom*. Someone who uses crazy wisdom (as defined by Wikipedia) is "someone who is adept at employing esoteric and seemingly unspiritual methods to awaken an aspirant's consciousness."

At a time when contemporary reality has become more fun to play with than fiction, Tarintino has used his crazy wisdom to make a thoroughly fictitious movie by effortlessly rearranging the reality of history.

And with his crazy wisdom, he even thought of us, the audience - this movie gets as close to participatory culture as Hollywood has ever gotten. At one point while my friends and I were sitting inside Rainbow Cinemas, we watched on the screen a small Parisian cinema filled with all of the highest ranking Nazis officers of the Third Reich laughing as they watched a propaganda film of a Nazi shooting Jews randomly from a bell tower. As they watched, they laughed, as they laughed, the cinema started to burn. As the cinema started to burn, we started to laugh from our Rainbow Cinemas. In Paris, in the burning cinema run by a young Jewish woman, the doors were locked and the highest ranking Nazis of the Third Reich tried to get out.

The beauty with cartoon violence is that you still get to use your logical brain while you are experiencing it. While we at the Rainbow Cinemas laughed, we knew we didn't want to be laughing - laughing exactly like the Nazis laughed at their film - but we knew that we were. We also knew that without us, this surreal loop of disgust and indifference for the death of others would not be completed. We were not being tricked, this was just the specific ride we were on. There is a difference between manipulating an audience and creating a game where the audience gets to play a role. What was happening never escaped us, and it was not meant to.

Plus, there are women in the movie.
Posted by Margaux Williamson at 6:25 AM