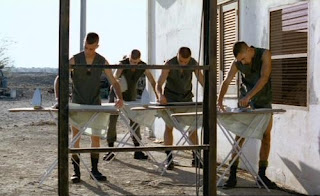 I had first seen this without subtitles. It’s an unusual kind of beautiful and quiet, and involves all kinds of foreigners so it’s not so crazy to watch it as a foreigner – not understanding the words so well. The movie is about a unit of the French Foreign Legion that consists of French nationals (most of whom have different cultural backgrounds) commanded by an old school French officer. The unit is stationed in Djibouti, Africa. There is no war or combat. The men move together in loosely choreographed unison during their military training exercises and in their play. The feeling of watching it is almost a refreshing relief - the camera focuses on a landscape of moving bodies functioning harmoniously within a group and not on the lonely landscape of one person’s emoting face.

It reminded me of my time at Bible camp - somewhere north in the Appalachia Mountains. A time that involved being woken up with a bugle, circling around a flag with others to sing the national anthem at sunrise, washing and folding your clothes military style at the age of seven, racing each other all day across the lake or up the hills, abstractly practicing being at war while a literal enemy is never mentioned.

It reminded me of the feeling of being in a group - one that you are a member of without too much thought, a group that has no need for fights because there is a sense that the fight is somewhere outside of this place. It is a gentle animal kind of intimacy that happens with others when logical argument is not needed or wanted and no one thinks that there is anything new to be learned from talking. The peacefulness of the group can make you forget that you are the ones training to be the soldiers - a utopic and ironic vacation from trouble.

I saw "Beau Travail" again recently with English subtitles. Though a similar experience, the underlying Melville story of "Billy Budd" emerges more clearly. The commanding officer (the old school French Legionnaire) develops a jealous hatred for a lower ranking but better-loved soldier. The soldier has a beautiful, open face and was orphaned at a young age without knowledge of his heritage. Melville’s original story is an epic one of good verses evil, but here the battle between these two men is so quiet and so small. The troubling injustice that unfolds between them is but a tiny blip in this seductive but menacing landscape of unison. How could it be otherwise?
Posted by Margaux Williamson at 12:08 PM