(I went to see this with my friend Julia Rosenberg who is an independent film producer. She was game and looked pretty great in the 3d glasses. I tried to take our picture with my cell phone but you could only see 2 small white dots on a black screen. We saw it on a Friday nigh in one of the biggest movie houses in downtown Toronto. We saw it with maybe about 400 other people in an IMAX theatre.) 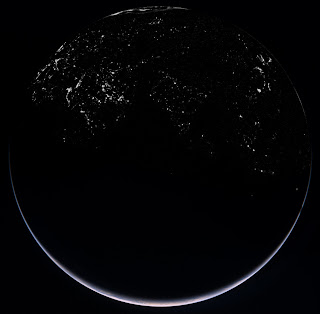 The first time I saw a movie at an IMAX theatre, I was nine. It was Christmas and it was Texas and I was with a lot of adults. I had on sneakers and a purple mini skirt. The adults bought tickets for a visual spectacle called “Earth” maybe, or something like that. We sat up close. The movie was about how we as humans were polluting the planet.

They showed images taken from above the earth to show how factories changed the colour of lakes and rivers. They showed images taken from ground to show how the sky was changing from everyday pollution. They showed people at work throwing their lunch waste in bins and then they followed their lunch waste to the dumps. They showed property development, clear cutting, forest fires, animals fleeing, deserts being created and rivers running dry. I remember there was a narrator with a soothing female voice. Half way through, I vomited. I was cleaned up in a bathroom by one of the adults and then taken back in to the horror. As I watched the rest of the movie, shivering, everything changed.

For me, the movie was an emergency newscast. But of course, when the lights came up, the adults around me (who had more experience with emergency newscasts) had to decide what we were going to have for dinner. This confusion is always part of our lives. After that movie, I always remembered how we didn’t go to war that day, how sunsets looked a little more sinister to me, and how much was my fault.

If I had, instead, seen "Avatar" in an IMAX theatre when I was nine, I think I probably would not have thrown up. I probably would have been excited about all the other 3D movies to come, and relaxed in knowing that there were seriously bad intentioned bad guys out there who weren’t me or my people. All we had to do was stop them, or maybe even they would have the good sense to stop themselves after watching this movie, and then we would get the flying horses back.

The moment “Avatar” ended and the credits started to roll, laughter sprung quietly from various corners of the huge audience. There was no applause, but also no booing. We had to give our glasses back on our way out. Mine had become filthy somehow by the end of the movie. The next day, I had no feeling about any of it but I did start to wonder when white men will begin to openly complain, along with the rest of us, about having to play stereotypes of themselves in fiction.
Posted by Margaux Williamson at 9:12 PM