A Dirty Shame (2004) - Written and Directed by John Waters


(Though I’m less lonely in the world because John Waters exists, and though I am crazy about his movies, I have avoided watching his “A Dirty Shame.” The cover image is of Selma Blair sporting the largest fake breasts one could prosthetically attach to a living person. Whenever I spot the dvd cover, something inside my body flinches. But recently, a short spell of serious men and their very serious work that I was supposed to be taking very seriously, drew me directly to this very same “A Dirty Shame” bright pink dvd cover at the video store – a cover that suddenly looked refreshing, good-natured and fun. I watched it early in the morning at my friend Sheila Heti’s house while she was out of town. She has the tiniest tv I have ever seen. I watched it with the volume on low hoping to not wake up the downstairs neighbors with anticipated comical sex noises.) 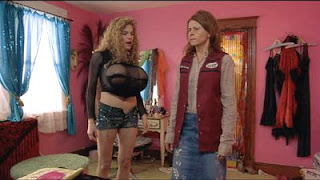 John Waters is not a boring man.

Also: John Waters is a genius at grounding complicated ideas in hilariously (and deceptively) simple concoctions of people, places, things and actions. This movie is about a zombiesque war between the “Neuters” and the “Sex Addicts”. Of course, this war is fought out on one street, Harford Road and primarily between the members of one family, the Stickles. The Neuters headquarters are at the local Quickymart, and are led by the matriarch of the Stickles family who is named “Big Ethel”. You can tell who the lead Neuters are when they are out on the street because they have their eggplant coloured Quickymart uniforms on. The Sex Addicts headquarters are at the Ray Ray’s Garage, you can tell who the Sex Addicts are because they are often sticking out their tongues. Ray Ray himself is a prophet who makes love to nature. Nature loves it. You can tell nature loves it because, after he does it with nature, nature immediately grows more flowers at a miraculous speed. And it’s clear that he’s a prophet because, very early on, he brings back to life a squirrel that he accidentally ran over with his Garage truck. Sex Addicts are made when they accidentally receive a concussion to the head. They can be “unmade” if they are accidentally knocked in the head again. The Sex Addicts are anxious for a prophesied invention of a new sex act. The Neuters just want to go home.

As you can see, there are pleasurable and solid answers for any question one might have about the plot of this movie. It made me think of my friend Kerry Barber (a filmmaker from the Yukon), of her 5 minute documentary “My Indian Bum” – a movie that also contains pleasurable and effortless answers. She asks people in her “Indian” community questions about their bums: Are Indian bum’s flat? Do you like flat bums? Why are Indian’s bums flat? People do their best to give concrete answers – for instance, one man answers this last question with, “I think they are flat because we are sitting down a lot."

I love nothing more than an unqualified answer. Why not provide the most reasonable answer with the information at hand? Why not assume the innate subjectivity (or fallibility) of any answer without the redundancy of qualification? Why not let the answers fall out of your mouth like solid objects – or at least to catch them on video that way? Why not understand that storytelling happens continuously in real life.

And in documentaries, the answers (that in life are flexible and wavering) do often become the concrete, unwavering bones of whatever large or small beast the documentary comes to form. One of the benefits of documentaries is that you are likely to build a functional (possibly even wonderfully absurd) animal if you begin with life. Because in life, there are a lot of reasonable, grounded and interesting answers.

One of the primary pleasures (and difficulties) with fiction is that you often need to know from the beginning what the answers are – what kind of beast it is that you are making. The more absurd the plot, the more concrete and grounded the bones need to be. John Waters’ bones are often hilarious and absurdly logical. His strangely shaped but functional beasts are perfectly engineered to roam freely with speed, freakish grace, and harmony through our real world. If there is a question about the beast or its skeleton, John Waters has the answer. He makes it look easy because he’s a gentleman (and also maybe too, because he is probably having a really good time).
Posted by Margaux Williamson at 9:50 AM