Twilight, a blockbuster (2008) - Based on the book by Stephenie Meyer


(I watched this late at night on my computer in sections on Youtube. I came across some of the footage when I was on the internet looking for white skin for a painting I am working on. I was intrigued. The video clips were elongated so that all the figures had very tall skinny heads and bodies. Also, I probably missed a bit of the movie with the different sections not matching up and I couldn't find the first sequence.) 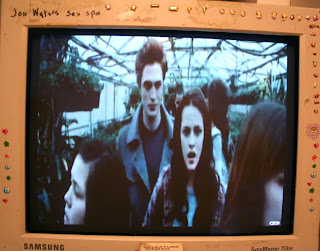 When I was watching this I thought - I can’t believe no one has told me to see this. The vampires are vegetarians! The trees are so tall and everyone is so beautiful and sad. Also, it is raining all the time and there is a teenage girl movie star who never smiles and barely says anything and who doesn’t work hard at making the more awkward more comfortable.

I love a story that takes facts from the real banality of life and uses those facts to tell the most seductive lies. Boy is mean to girl (because he loves her so much he might kill her so he has to be mean to keep her safe from himself). They don’t have sex (because it is too dangerous for him to lose control, he might kill her. There is some natural and light S and M (right before he kisses her for the first time, out of caution for her - he tells her “don’t move”). He shouldn’t bring her to meet his family (because they might kill her – she smells better than most humans and the temptation to go non-vegetarian with her is high). Finally, a girl in a movie desired so perfectly and so perfectly left wanting. It is the most convincing and conventional romance novel. Maybe this is dangerous for young people who will be sorely disappointed by their first loves – or willing to convert religions for them, but it is not dangerous for me.

The girl is very clumsy and the boy, with his supernatural powers and focused attention on her, finds himself continuously and instinctively saving her in the nick of time from physical harm. There is a moment where she trips slightly, he catches her and immediately annoyed says “can you at least look where you walk”. NICE.

I also love how the parents are the ones who are always texting at the wrong time and whose own love is stupid and silly and vain. But the vampires are A LOT older than the parents so it makes sense that they are more serious.
Posted by Margaux Williamson at 8:58 PM