(I watched this at the Carlton theatre in Toronto right before the theatre closed permanently. I went with my friends Carl Wilson (critic) and Ryan Kamstra (poet) and saw it late on a Friday night. There were spurts of uncomfortable and uncontrollable laughter (possibly very healthy and necessary for watching this movie). Afterwards, we excitedly wandered the streets - hysterical and a little confused. I think this is the ideal way to see this movie – particularly with a poetic critic and a critical poet – and a painter who keeps getting the phrases “genital mutation” and “genital mutilation” mixed up.) 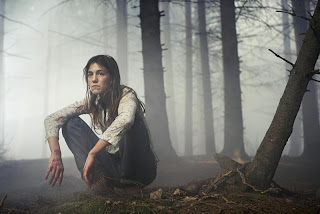 At one point, while watching this movie, I think I felt an actual prick of jealousy because it was so good. Another part of my brain was thinking – Lars von Trier? Genius film about misogyny?? And the loudest part of my brain was yelling – Ack! Shut your eyes!! We don’t know what she is going to do with that old piece of farm equipment. We don’t, as eyes, want to even see the farm equipment!!

It has always seemed weird to me that the murder of tens of thousands of women during those centuries of hysterical woman-burning is still dealt with much more by the Monty Pythons out there than ever really the Steven Speilbergs. Though I’m super glad, for the sake of my people, that gynocide skipped over Speilberg once again in 2009, and am *sort of* glad that it went to Von Trier. It had never occurred to me that this literal subject matter could be used in such a grounded fashion in such a contemporary story about the contemporary world. Lars Von Trier manages to make a kind-of simple and stunning film with this for a heart. The plot of this is less of a clever, or damning, one-liner than his other films are, it’s much more complicated and searching – more intuitive and alive. Visually - completely right, even just one of the two main characters “He” carrying around a piece of crumpled lined paper with an absurdly simple, sometimes stupid, chart of what “She” is *irrationally* fearing. He keeps adjusting the words on the chart to match his slow observances – the best kind of poem-making ever. If I could have this piece of crumpled paper, I would keep it close always. She is a bit broken as a human with a recent tragedy and he is attempting to cure her. He is broken too and curing her is his attempted cure for himself. They have gone to their remote cottage for this task. The last use for this place of isolation was her lone attempt to finish her thesis on gynocide.

On this trip, He eventually stumbles across her somewhat hidden work room. We see all of her abandoned academic work as She had left it from the year before. We see the evidence of her work as He sees it - the subject matter starting from horrific historical pictures of women being tortured and burned to her dense and lengthy academic writing turning then to loose and frantic gibberish (a pretty and logical sequence). At this He becomes more actively worried for her state of mind and maybe a bit more unconsciously worried for himself. Later in a casual attempt, without confessing that he has seen her work room, he asks cautiously what happened with her thesis – asking what she left off saying about gynocide. She replied offhandedly something like, “..well… the women were punished . . because they were evil”. His calm, arrogant psycho-analytic façade fell away as he sputtered, “What?! You’re an academic! You are supposed to be critical of these things!!” And she replied calmly, as though correcting herself in a dream, “Oh, of course… I don’t know why I just said that”.

This is exactly when I got jealous. It is one of the most genius stories I have ever heard of:

Woman writes thesis about misogyny - gets confused.
Posted by Margaux Williamson at 9:39 AM