( I went alone to the Bloor St. Varsity Cinemas on a Saturday night. All the shows were sold out except for “The Imaginarium of Doctor Parnassus”. The movie is about an old man who - with some help - carts his old-timey fantastical show around a contemporary city looking for an audience. I sat in the middle seat of the front row. Two young French women sat beside me. The one closest to me was wearing a furry white beret.) 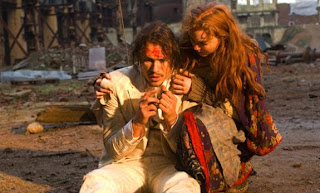 But in this one, his groundless imagination and fantastical aesthetic are firmly contained inside an old wagon pulled by horses along the contemporary streets of downtown London. And though there seems to be a suggestion that the "real world" is losing the imagination war - I was very happy to be seeing the real world. Inside the wagon, and specifically through a magic mirror, a world of imagination exists that is just as infinite as the one outside. But we always know, when we are there, that it is Dr. Parnassus’s world and not necessarily our own. It was much easier to appreciate what was inside the wagon – once I knew who’s wagon it was and where in the world the wagon was located.

Four men and Parnassus' beautiful young daughter cart the wagon around, hustling for their living to diminishing audiences and occasionally saving or damning some souls - including their own.

At turning 16, Dr. Parnassus’s daughter is to be reimbursed to the devil. Dr. Parnassus spares her this information until one hour before her 16th birthday. He has hesitated telling her because he was hoping to reverse the situation through some more bargaining. When he does finally confess his pact with the devil, he tells her that he might have a few tricks left from his imagination at this late hour- that he might be able to save her still. She becomes furious. She screams "I am sick and tired of your imagination!! I have lived with your imagination my entire life and I want no more of it!".

I am not sure if Terry Gilliam is resigning himself to thinking that this "war of imagination" is being lost or if he understands that maybe it is a different game now. Based on the evidence of "The Imaginarium of Doctor Parnassus", I would guess that, in various parts of his mind, he believe both things to be true. And fortunately for the audience, the grounding of the wild imagination here in such a logical and interesting manner combined with the unusually humble approach he seems to have taken with the whole project, contribute to the success and the magic of the movie.

When I left the theatre (practically walking in a circle and trying to shove open the door to a broom closet that I thought was the washroom I was so disoriented) and walked home through the streets of contemporary Toronto, I felt a little bit of what I imagine Terry Gilliam must feel a lot when he leaves his eyes open and walks through contemporary London - the world is sometimes as magical as a cardboard box.
Posted by Margaux Williamson at 2:02 PM