(At a diner with red cushioned booths, as the theme song from "The Godfather" played from the radio, my friend Lynn Crosbie asked me what good could possibly come of "The Godfather". Like most people, I have seen it as many times as I’ve seen “It’s A Wonderful Life”.)

Before I had first seen “The Godfather” movie, it was a book I had come across when I was eight. My grandmother had it next to the Bible in her living room. I remember wondering if the adults around had read these two books since they both suggested different morals than what I had, so far, been let in on. Though no one seemed to mind that I was reading them. It is good that books are not rated.

While reading - this is what I paid most attention to:

Sonny (Don Corleone’s son) had an abnormally large penis and Lucy (Don Corleone’s daughter’s bridesmaid) had a technically loose vagina. They were both miserable (or caused others misery) until they had the good fortune of finding each other and fitting together so perfectly. When Sonny was shot down, Lucy was alone and miserable again. But then she again had good fortune and fell in love with a surgeon who then diagnosed her with “loose vagina”. He easily repaired the problem with a simple surgery, then provided her with normal sexual pleasure. Mainly what stayed with me was this idea of “good fortune”. But anyway, this part didn’t make it to Francis Ford Coppola’s movie. So back to the movie and the *what good of it*. 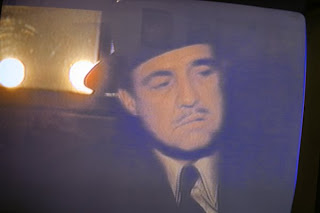 The thing that makes “The Godfather” so easy to watch over and over again is the same thing that it’s good for.

Don Corleone looks out at his children. He is old so he knows the great precariousness of one’s path in life. He knows that sometimes the young get eaten up early and sometimes they become monsters. He knows their fates are owed more to their natures and to their luck than anything he could say to them so he doesn’t say very much. But once, he couldn’t help himself. At a time when he was becoming more careless in life, he leans over to Michael (his youngest son – the one he both longs to always see and to protect) and tells him that women and children can be careless, but men cannot.

But the reason that it’s possible to watch this tragic and bloody movie so many times is because Don Corleone is careless. Careless mistakes (to be separated here from intentional mistakes) made in “The Godfather” are the only thriving life to be found in the mostly-dark-with-blood-red-accents aesthetic that surrounds the men in their business. A kitten, some oranges, a look of love not managed to be hidden, a fit of protective rage, any acts of playfulness – these are the foreign elements to be cautious of in this masculine world. These foreign elements are both hopeful and dangerous. They let life in, but they also can let death in. These elements are the only windows. We want Don Corleone to be both careful and careless. We don’t want to see him get shot, but we do want to see irrepressible love come across his face in the wrong moment. It is what makes this movie tolerable.

It makes sense that Don Corleone felt compelled to give this advice to Michael. Michael was also a foreign element when the movie begins – the only son outside of the family business. Don Corleone has a weakness to protect him. In a way, we too want Michael to be very careful as we watch him enter the family business and watch as his world physically grows darker around him.

But within 3 hours, we are most seriously grieved to see Michael take this advice. We see him become more careful than his father was ever capable of being. We literally see the doors shut around him and we are left on the other side with Diane Keaton. It is the success of this carefulness that looks like death to all of us. And though we no longer have to fear for his physical safety, we know for sure in our hearts that his is the worst fate. And this is where we are left when the movie ends. It makes sense that we want to start from the beginning again. To see a sudden amusement in Don Coreleon’s face, to see him play with a ginger cat, to reach for the oranges, to have the good luck to survive his business, to be able to retire and enter this mythical world of women and children’s carelessness, to die at the peak of his carelessness – only playing at being the monster for the amusement of his grandson.

And again - as we are left at the end of the movie, now watching Michael only playing at being a loving family man while never betraying a false note in business - it is good to be reminded that despite the good fortune we think we want and others want for us, we need more than anything these moments of carelessness, to allow for the mistakes that make us and the journey more tolerable.
Posted by Margaux Williamson at 9:25 AM