(I watched this with my boyfriend Misha Glouberman at my favourite movie house in Toronto, the Royal on College St., It is a big cinema that is always pretty near empty. Sometimes you see the directors standing outside smoking and once I saw the main actor - in the movie I had just watched - sitting at the back with her friends. The conversations before this movie started were hilarious. People explaining to their companions who Werner Herzog is. People explaining to their companions who Nicolas Cage is. It sounded like no one had seen the first Bad Leitenent movie – the one where Harvey Keitel was acting. I hadn’t either. The movie was out of focus for the first 10 minutes, but then the projectionist fixed it.) 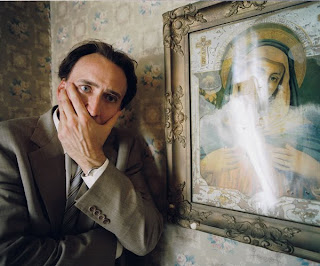 If life is art for you and you are living your life and in your life you want to watch a Hollywood cop movie that’s about America, you go see this movie, cause it’s like you’re dreaming a cop movie about America in public with other people around you. And for you, maybe most of life is art – but sometimes it is more so.

Sometimes the movie comes into focus as a real cop flick complete with a banquet ceremony and a happily pregnant ex-prostitute and then it goes back out again to the place where you’ve been dancing to the beat for a million years in an unconscious stupor.

I like best Werner Herzog's documentaries. They always seem more bizarre than a straight fiction is often capable of being and his strange voice-overs are a big part of this. It's actually kind of generous to suddenly tell the audience, with a dead serious and floating voice, what metaphor we are to go with while we watch a bear coming towards the camera. It’s a hard thing to do because a German-accented voice-over is pretty near some people's definition of pretentious. But when Herzog does it, it is the opposite. It’s accessible. He is not ever being mysterious or windy, he is shooting down metaphors with a pellet gun and saying – wow, look at this one. We are all coming from different places – it’s helpful and interesting to know where the director is coming from and where he is going. Telling the audience straight-up is one way to go about it.

No voice-overs in "Bad Lieutenant: Port of Call - New Orleans" cause it's not that kind of movie. But a similar need/ instinct to lock down the metaphors comes out. The most beautiful and hilarious one happens immediately after an intense crack-smoking session when there is a shoot-out between a group of 3 men on one side of a room and a group of 4 men (this group including Nicolas Cage) on the other. The 3 men fall to their deaths, the group of 4 remain standing in the silence of the gun-smoke filled room.

Nicolas Cage is the only man without a gun. He suddenly yells “Shoot him again!” One of the other 4 men says “They’re all dead, man.” Cage says, “Shoot that one again - his soul is still dancing!” Because of Cage’s intense drug use and constant hallucinations throughout the movie, we assume that he is literally seeing a soul dancing. We have also witnessed him talking to others, without too much concern for being considered crazy, about things he sees that are clearly not being seen by others. So as he says "his soul is still dancing!" we see a straight double, of one of the men lying and dying on the floor, upright and dancing a crazy jig – then we watch the slow fall as one last bullet goes through his body. We know that what we are seeing is a representation of another man's hallucination and not only a suggestive metaphor. For Herzog, it’s always this kind of heavy and simple poetry – patiently tying anything ethereal to the ground so that it can't get away, and so that we can remember where it came from.

It made me think that the seed of this project was Herzog thinking - I wonder what a soul looks like when it is dying and fighting and dancing all at the same time.
Posted by Margaux Williamson at 4:29 PM