(This always looked pretty compelling on the video store shelf but was always out when I would think to pick it up. The day it was in, it looked a little less compelling. I remembered, once I had it in my hand, that I had not had such luck with movies about fashion. But it still looked compelling enough.) 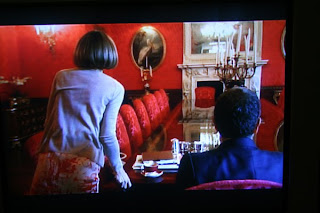 The September Issue is a documentary about the all-powerful and greatly feared editor of Vogue magazine, Anna Wintour. Anna Wintour is credited with creating a “fashion bible” through Vogue, jump-starting the careers of young designers, centralizing the power of the fashion industry in a circle around her, striking fear into the hearts of subordinates, reigniting the fur industry, and ending grunge.

The movie covers the creation, which Anna Wintour oversees, of the 2007 September issue of Vogue – the bible part. Here, Anna Wintour is a woman who loathes small talk, is self-aware of the relation fashion has to the rest of the world, works incredibly hard, tries to not get mad when others don’t work as hard, uses words more than facial expressions to communicate, is incapable of following her grown child’s every move without adoring and irrepressible love in her eyes, reacts to things she dislikes with silence and reacts to things she likes with genuine praise. She is not primarily negative and she is not a trash-talker.

When I was watching this, I couldn’t remember if this is what our culture thinks a bitch is or if this is a very generous portrait of a woman and an industry.

Sure, you feel for the people who quiver in her uncomforting presence, but you also hope for a bit more integrity of character. If fashion really is an intersection between art and commerce, we think mostly of the commerce part in these moments. We also see that Anna Wintour does believe (or hopes) that fashion is meaningful and that art is involved. Her relief is obvious when people around her seem more preoccupied with the art than with winning her favour for obvious and easy reward. Her relief is most notable here in relation to Grace Coddington, Vogue’s creative director. The working relationship between these two women forms the poetic spine of the movie.

Anna Wintour’s immensity of character was the subject of another movie - fictionalized in The Devil Wears Prada, a movie based on a book of the same name that was written by one of her former assistants.

For The September Issue, the man allowed in to document the real Anna Wintour is named R.J. Cutler. R.J. Cutler’s production company is called “Actual Reality Pictures” (quite a tall claim in these early 21st century times, but anyway). Based on the production company’s name, and the other projects listed on their website, it appears as though R.J. Cutler is a man who thinks that reality TV is not real and that he is the man who will make it real. Though this just means his is a old-school documentary filmmaker whose weakness will be in forgetting his own subjectivity and impact on his subject (or his subject’s impact on him).

All in all, not a bad fit for a real person who was referred to fictionally as “The Devil” right there in the title of a Hollywood movie starring Meryl Streep. How much worse could it be in an old-school documentary? Not worse, though also not great. And clearly Anna Wintour is a subject worthy of something monumental.

If I was Anna Wintour, I too might have invited R.J. Cutler of “Actual Reality Pictures” to take my picture after I was fictionalized as “The Devil”. Had “The Devil” not happened, maybe someone from the production company “Not So Much Actual Reality But Still Kind Of Reality and Killer for Deeper Truth About Humans” would have gained access and made a complicated mountain out of this mountain of a subject. There is still time.
Posted by Margaux Williamson at 9:51 AM