The Ring (2002) – directed by Gore Verbinski, based on the the movie by Hideo Nakata, the novel by Kôji Suzuki & the Japanese ghost story Banchō Saray

(My friend Duane Wall likes horror movies but none of his friends do. So every year on his birthday, he selects a horror movie and then invites his friends over to watch the movie. Last year was Bruce MacDonald’s Pontypool and the year before was David Cronenberg’s The Fly. This year it was the American version of The Ring. The movie’s title was kept secret until it started, when five minutes in someone shouted, What is this called!?) 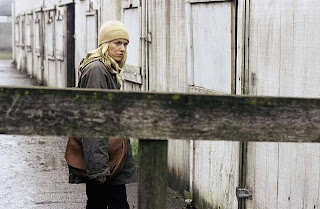 The Ring is a horror mystery about an unmarked videotape that somehow kills the people who watch it. The short video work features black and white footage of disturbing and seemingly unrelated scenes. One of the characters, before being properly impressed by the power of the video, expressed his opinion that it just looked like a bad student art video. (His respect deepens quickly enough). After a person watches the video, they receive a mysterious phone call and then die seven days later with a look of horror on their faces. That is, until an investigative journalist (played by Naomi Watts) starts poking around.
The movie also stars a self-sufficient child, a man afraid of monogamy and fatherhood, horses, a cluster of worn and futuristic apartment buildings and a good old-fashioned romantic/creepy island.
The atmosphere of the movie was seductive and its themes pleasurable: “don’t eat that apple!” verses “knowledge will set you free!”, peace-making verses resourceful military strategizing, the goodness of a small community island versus an impenetrable microcosm that is intolerant of foreigners and misfortune, metaphors of scapegoats and viruses becoming interchangeable.

There are lots of fun things to say about the movie but they all involve the ending. I never mind hearing the full details of a plot before I see something, but for the kind of movie whose primary success is derived from its surprises – maybe it is best to not give away its secrets.

Later on, after watching the movie, my mind wandered to the plot points and tried to connect the ways certain elements fit together. When I could fit them together with logic, I would feel a spooky pleasure. When I couldn’t, and the only end point was “supernatural mystery,” I felt as disappointed as a kid being told that babies come from heaven. We all know the real answers can be a lot crazier than the made-up ones.

It made me think of an article I had read awhile ago about David Cronenberg. He talked about being sent scripts from Hollywood that involved the supernatural and how insulting or disappointing that was since he, as an atheist, was philosophically opposed to those views. He assumed that anyone who watched his movies could see that.

I loved the image that comes to mind with this scenerio - confused studio executives trying to understand both the moral integrity of David Cronenberg and the difference between The Fly and the script for the demon/god vehicle Constantine while Cronenberg looks on patiently disappointed by what to him was obvious - his horror movies are entirely of this world.
Postscript: I also enjoyed the movie Constantine.
Posted by Margaux Williamson at 4:03 PM