(I didn’t know too much about “Uncle Boonmee Who Can Recall His Past Lives” but I liked the title and I had half-noticed that the word “art” kept being used in relation to it. Somehow the “art” was not mentioned in either a flattering or negative way, just a descriptive way. “Art” can mean a lot of things, like that the characters will have a lot of feelings or that it will be either pretty unpleasant or extremely pleasant to watch or that the movie will be going after something difficult to catch. Very quickly into “Uncle Boonmee Who Can Recall His Past Lives”, it was clear that the “art” in this case related to the words “intuitive” and “unusual” - and also maybe “going after something difficult to catch.”) 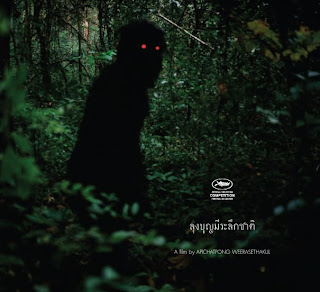 Servants carry a princess through the jungle. It looks pretty unpleasant to carry a princess through the jungle. But also, it looks maybe a little bit erotic. The princess has a face darkened with a scar or birthmark. The party comes to rest at the base of waterfall. There, the princess tries to convince herself that intimacy with one of her servants is love. It doesn’t work. She sends the servant away and collapses alone by the water’s edge. She cries and voices out-loud her longing for pure and white skin and also for true love. At this point of despair a catfish begins to talk to her from the surface of the water. “Are you a ghost?” she asks the catfish. “No, I am a catfish”, the catfish says. She eventually enters the water with abandon and has sex with the catfish. Something is being promised to her but we are not sure what it is.

There is a big bull tied to a tree. We stay with the bull for a while in the half-dark. We start to relate to him like any character in a movie. He makes a noise and we sort of know what it means. It seems kind of awful for such a big creature to be tied, by the neck, to a tree in the middle of a field. But maybe it’s ok. In a quick moment he yanks his rope free and lightly runs his giant body to the outskirts of the jungle and then stops there for a bit. Eventually, a man finds him. The man gently leads the bull back towards the field.

Uncle Boonmee has a farm where he grows tamarind and sweet and sour honey. Uncle Boonmee’s kidneys are failing and he thinks he will die in two days. He wonders if it’s because of his karma. “I was bad to the communists”, he says during his dialysis treatment. On the porch, he eats dinner with his sister-in-law and her friend when it is dark outside.

They all sit together at the table quietly. There is very little small talk. The whole movie feels like this, as though every living thing is cautiously acting and speaking as simply as possible in order to make room for some understanding.

Eventually, the wife-ghost and the monkey-ghost are shown photo albums of the years they have missed.

Later on, we are shown still photos too. The photos we see were taken in a field during the day: of a monkey-man being led out of the jungle with a rope tied around his neck by a soldier in camouflage. These photos are the strange cousins of horrific photos we are familiar with from history, but here, in this movie, we see and think about the photos in a different way. Which is good because they are difficult to understand in a logical way.

There is another photo of soldiers, laughing and smiling – it seems like something bad is happening to the monkey-man. Then there is a last photo of the soldiers and the monkey-man posing together, the rope still tied around his neck, everyone smiling. Maybe it is OK we think, but probably it really isn’t.

Later, back in real life at Uncle Boonmee's farm, Uncle Boonmee, his ghost-wife, his sister-in-law and her friend start on a journey away from the farm and into a field and down into the jungle. The ghost-wife is leading. Uncle Boonmee is trying to make the best sense he can out of his good and bad deeds before he dies. This journey is the best he can do now. They go deeper and enter a cave that looks like the frozen stalactites of centuries-old falling water. They travel deep down into the cave, Uncle Boonmee moving slowly. At the very bottom, they find a tiny pool of albino catfish. This is where Uncle Boonmee lies down.

The movie is not an exploration of filmmaker Apichatpong Weerasethakul’s wild ideas. It is him trying wildly to make sense of the best and worst of life’s absurdities by expanding and examining them with intuitive logic.

If you are adept at intuitive logic (and with navigating the trauma that was the 20th century) his film will be as clear and seductive as early dusk. It will be as practical and as heartbreaking as any story about injustice, hope and despair could possibly be. Funny too. And beautiful.
Posted by Margaux Williamson at 11:19 AM