(My friend Amy Lam asked if I wanted to go see this at the Bell Lightbox in Toronto. I had seen it before, but only once on my television. We ran into our friend Jon Davies in the theatre and sat next to him. After the movie Jon told us that this particular Vagabond screening had a no-popcorn-allowed policy. Amy and I were pretty surprised by this information though we hadn’t wanted any popcorn.) 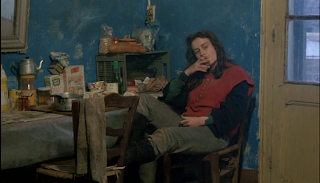 Vagabond is about a young female drifter named Mona who lives mostly in a tent that she carries on her back, having abandoned the accepted needs, requirements and rules of polite society. Vagabond could also easily be described as a movie about filmmaker Agnès Varda’s curiosity with a young female drifter. It is one of Varda’s first movies to combine a documentary approach with fictional content – an interest that eventually drew her out of the “French New Wave Legend” category and into the “Influential Contemporary Genius” category.

The movie begins with Mona’s dead body lying in the cold landscape of a French vineyard. Varda tells us, from behind the camera, that this young woman seemed to have come from nowhere and that now she is gone without anyone coming to claim her body. Varda tells us that she wants to know what her story was – as best as it can be understood. She says she wants to gather information from the people who came across Mona in her drifting in order to find Mona’s story.

And so we start again - with the living Mona coming out of the water. The movie follows the rest of her actions and her interactions (and the testaments of those who interacted with her) until her death. It all takes place in the south of France. Some of the interview subjects offer their judgments of Mona and reveal their prejudices – others express admiration and curiosity. These reactions may not be surprising, but it is compelling that most of the admiration and curiosity comes from the women, old and young. Many of the performers are non-actors. Perhaps it is because Varda is so adapt at directing “play” that the performances from the non-actors fit in so seamlessly with the “actors" and with the loose and direct style of the whole movie. There is a real sense that everyone is “at play” at telling an incredibly serious story.

The characters include Mona’s employers for a short time, lovers for a brief moment, hitched rides that end quickly, and casual companions who are easily lost. These characters end up circling each other, too, at different times and places. It starts to look like a small world with cause and effect. We see a community being created through Mona even as she holds herself away from it. These intricately webbed interactions seem a little bit more fairy tale than realistic but we understand this fairy tale is based on evidence from the real world. Along with Varda, we are telling ourselves a story about Mona too. It is often challenging avoiding the human tendency to make stories – to make order out of random interactions. This movie does not repress the urge to connect the dots. It is the movie’s primary pleasure.

In the narrative hunt to learn who Mona is, we start to see a map of the south of France as traced by Mona – the rich people, the labourers, the small towns, the vineyard landscapes. Mona doesn’t let anyone (not even the audience) into her thoughts and feelings. We feel grateful for this, grateful for this expanse of land outside human neurosis.

We feel grateful too that Varda is more curious about Mona than pitying. Maybe it’s because Mona wants no help, represses nothing and desires little that there is a notable lack of tension around her. Her brutal honesty and lack of social discretion and generosity do her no favours - we see her get kicked out early from a ride because she insults the driver’s car, unprompted. But we also know that she wasn’t really going anywhere anyway so it made no difference that she got kicked out. Her lack of repression combined with her lack of need creates a palatable absence of social anxiety – at least for Mona and for us in the audience who may be inclined to feel sorry for her.

The original French title for this movie translates as “with no roof and no law”. Unfortunately, living without rules comes with its own joyless burden. Boredom trails Mona’s lack of social anxiety like a disease. It is boring to not need anything - to not give anything. We only see Mona’s desire ignited, and boredom lifted, on the rare occasions that she drifts by a radio and hears rock n’ roll.

Like the differing opinions of Mona help by the characters she comes across, the audiences will have a million different opinions about Vagabond. For me, it made me think that too much freedom from society can feel less like rock n’roll and a lot more like a muddy, boring entropy.
Posted by Margaux Williamson at 8:45 PM