(My friends Sheila Heti and Lucas Rebick saw “Town Bloody Hall” over the weekend. Sheila called on Monday to see if I wanted to watch it, she said I would like it. My TV was broken, so I walked over in the rain and sat down on a couch that only had one leg. Sheila used to have a small tv, but now it is very big.) 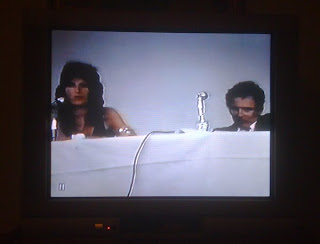 It’s April 30, 1971 and we’re at New York City’s Town Hall. There are a few tables on stage with white tablecloths and several microphones. There is one podium off to the side. We watch the people on stage and in the audience settle into their seats. People seem excited.

I am not one to normally be nostalgic for the past, but man (!) does everyone look good. Everyone looks totally different from one another and there is an absence of polar fleece (not to be invented until 1979). Is that a fox around Germaine Greer’s glamorous shoulders? Jill Johnston looks like the fun member of the Ramones. Norman Mailer (who is the only man on stage) looks like Norman Mailer.

The other heavyweights, along with the three just mentioned, are Jacqueline Ceballos and Diana Trilling. Susan Sontag and other famous writers fill the seats in the audience closest to the stage and will soon ask some hilarious questions. Norman Mailer has just published The Prisoner of Sex, and Germain Greer, The Female Eunuch.

The event was put together by the Theatre for Ideas and here are the rules of the evening: Norman Mailer is the moderator, all five panelists are allowed 10 minutes to make a speech at the podium, Norman Mailer is to cut people off when they have gone over their time and also to then ask them a question (in response to their speech) that they are not allowed to answer till the end of the evening.

All five panelists are incredibly intelligent and have interesting, complicated opinions, especially Germain Greer who is like an inexplicably calm lightening rod. Each say totally different things from the others. Most of them can barely look at each other as they argue their position with force or respond to each other’s question - except for Jacqueline Ceballos who seems to be enjoying herself immensely as an on-stage spectator.

The audience seems ready to burst with their wavering reactions to what is being said – and occasionally does. One man from the audience starts screaming incoherently about “humans” as he wrestles to put on his jacket and storms out. Later, another woman bursts in angrily yelling about not getting in because there were no seats left. She is escorted back out.

This structure set up by Theatre for Ideas creates really great theatre. For instance, having Norman Mailer function literally as the authoritarian for the event both mimics life and also reveals its inherent absurdity. If the event had been set up as an ideal political structure for a panel discussion on women’s liberation (i.e. the man not in charge) the “art” wouldn’t be there to bring out the tension and humor or the playful and painful metaphors. This choice shows Theatre for Ideas’ interest and skill in art over an interest or skill in setting a political standard – or it shows, maybe, that they believe art will help get them there faster and in a more amusing manner.

The choice of Norman Mailer is great too. Though he is, by our 2010 standards, wildly sexist (presenting while on the panel, for instance, a strangely illogical semi-defense of wife-beating), he is not smarmy or condescending. There is no grin upon his face. He is exasperated and humourless, like a great clown. And, like a great clown, he keeps accusing the women libbers of being humorouless. Then, when the women make great jokes, Norman Mailer accuses them of being from Brooklyn.

The monologues are presented from the podium against the mass of the sometimes supportive, sometimes jeering, and sometimes dismissive audience. This is where I remember the value of a live event. It is easy to forget that a monologue isn’t just a conversation with oneself. It can also be the pushing of a thought into public space. And this movie shows that process. It is very clear that enduring the jeering while remaining firm about what one is saying, or persuading the audience through rhetoric to be cheered on, can be as important as what is being said. It is even clear here (maybe never more true than at New York’s Town Hall in 1971) that the visibility and unwavering stance of the speakers was as important as the details or arguments in the monologues.

The movie is thrilling and entertaining. Afterward, Sheila and I wondered about the filmmakers not doing anything with the footage till 1979. I thought that maybe (as has been our own occasional experience with live performance and cameras) the event was so intense that they filmmakers just couldn’t think about it for awhile. That maybe they put the footage away in a drawer for their own sanity.

My guess was corrected by a few meager facts on the internet. The filmmaker DA Pennebaker, had been told about the event from Norman Mailer. DA Pennebaker went down to Town Hall to shoot it. Afterwards, he put the footage aside thinking the footage “showed how silly women were, taking themselves so seriously.” A few years later, a new editor working with him, Chris Hegedus, ended up salvaging the project. As DA Pennebaker put it, Chris Hegedus “disabused me of that idea”.

There is always jeering, dismissal and prejudice – thankfully this movie is proof that brilliant monologues, brave stances and thoughtful art structures sometimes make it through the belly of the beast.
Posted by Margaux Williamson at 8:06 AM