(I saw “My Own Private Idaho” for the first time when I was 14. I had just moved to a new city and was invited to a popular girl’s birthday party. In the middle of the party, in a small room with a TV and a VCR, the adults put the video in, hit play and left the room. Pretty shortly after it started, the room cleared out and the party continued elsewhere. I moved to the side of the room where people couldn’t see me from the door and watched it, alone, to the end. I couldn’t believe what I was watching – how good it was, how big it seemed and how warm it felt. I wasn’t sure why people had left. The people I was watching in the movie, who would never see me, were the first in a long line of distant friends. I bet there were a lot of grateful 14 years old in 1992 - lone kids at the wrong birthday parties who were as grateful as I was that River Phoenix and Keanu Reeves gracefully delivered Gus van Zandt to the television nearest them.

I thought of the movie recently when I picked out a book I’ve had for a while but never read – a printing of the original screenplay for “My Own Private Idaho”. The book was so old or cheaply made that the pages fell out when I opened it. I tried to read it for a bit, but it only made me want to watch the movie again. Which I did.) 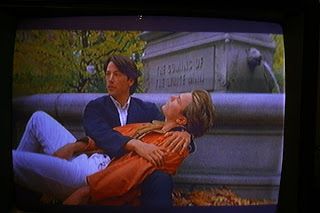 We start out on the road with Mike (River Phoenix). Mike looks down the road both directions and talks to himself. He is not sure what’s forward or what’s backward so he thinks about the road. Mike thinks maybe it’s a special road, not just any old road, but his road. Maybe even a road he’s been on before. Maybe he's trapped in a really old story – as old as roads are. But maybe, also, it’s a new story that might be as new as Mike is. We're not sure.

Scott is like Prince Hal from Shakespeare’s “Henry IV”. Prince Hal leaves the court and his father (the King Henry IV) in order to partake of unrefined pleasures in taverns with low companions. He takes up with Falstaff, a charismatic and corrupt fat man. Prince Hal’s idea from the very beginning of Shakespeare’s “Henry IV” is that his eventual but surprising return to respectability will win him more respect than even if his character had been consistently respectable. He is banking on the old biblical story of the return of the prodigal son and the gratitude of a relieved father.

Here in the 20th century, Scott takes up with Fat Bob, a charismatic and corrupt man who lords over the young hustlers like a father. Scott calls Bob his psychedelic father, a truer father than his real father – but he does tease and play around with Bob mercilessly. Here, Scott’s true and best friend is Mike.

Mike and Scott laugh, journey and kill time together. We see the pleasure they have in each other’s company, how it is most fun and free when they are together - how seductive their small world is. We see Mike’s adoration and deep love for Scott. We see Scott’s small but kind gestures of protection towards Mike – Mike being someone whose physical and emotional vulnerabilities call for a bit of protecting. These gestures often happen when Mike is passed out or about to pass out– Scott covers him in his coat, Scott holds him so he doesn’t have to lie on the concrete fountain, Scott discreetly ends a performance from an avant-garde dancing John when he sees that the stress of the performance is starting to send Mike into a narcoleptic fit.

Like in Henry IV, Scott’s plan to forsake this low companion life and return to respectability is not a secret. But somehow people don’t listen to him or believe him, or believe that he could really leave them behind. But he never promises otherwise.

And Scott does indeed return to respectability. He abandons completely his low companions – returning home with a haircut and a woman, stepping into his father’s footsteps as a political elite and doesn’t look back.

Abandoning Fat Bob is one thing, but here, in the 20th century, to leave Mike behind seems incomprehensible.

But instead of betrayal, it feels like something else. It only feels like the romance, love and light has been drained from the landscape of the world we have just been shown, from Mike’s road and from Mike. Instead of the pain of betrayal, we feel the pain of the same world with different feelings – a world without the clever and kind Scott. Now we remember that Scott had nothing but choices (wealth or poverty, men or women, a heart or no heart). We remember that Mike had no choice in those matters. What is left of the world without Scott is literally a life not chosen, whereas before it had felt occasionally like a lucky day.

Near the end, two funerals take place in the cemetery. The Fat Bob has died from a broken heart after Scott's final rejection of him. The low companions slump around the cheap casket, drinking. Mike is there, glaring off across the expanse to the funeral of Scott’s father who has also died - this death occurring just in time for Scott to take over the family business. Here in the cemetery, Scott sits quietly with the respectable people. They are all dressed in black and are observing the ceremony.

Back across the field at Fat Bob's funeral, which is becoming louder and rowdier - we see Mike and the low companions start to scream Bob's name in celebratory mourning as they jump around and jump on the cheap casket lying above ground. We are reminded that Mike and his low companions have something Scott has recently lost in his new life – total reckless freedom to properly mourn the passing of a friend.
Posted by Margaux Williamson at 10:21 PM