Mind Game (2004) - written and directed by Masaaki Yuasa, based on the comic by Robin Nishi

(I watched this animated movie at home with my boyfriend. We were going to go to the movies, but decided to stay home and watch a DVD and make popcorn. I didn’t know anything about it other than a probability website estimated that we would both like it 90% and that it played at the MOMA. Also, I liked the title “Mind Game”. I liked that it wasn’t pluralized, that it promised just one game.) 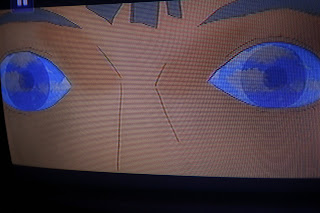 A young man, who doesn’t have enough courage to try to win the heart of his childhood sweetheart or to become a great comic book artist, gets shot in the anus by an angry gangster.

As the bullet leaves our young man’s head, he goes to heaven. God (a radically shifting form) is getting ready for a date and explains to our man, with a great deal of distraction and irritation, what is happening and tells the young man to walk over there (God points somewhere to the right), towards his disappearance. The man begins walking to the right, but then he suddenly turns and runs the other way – back towards the world. God, now a tiger, tries to catch him, but can’t keep up with the young man’s sudden burst of courage. As the young man falls to earth, God watches from above, now admiring, and says quietly, I’m on your side. The young man arrives back in the world in the moments before he is shot. This time, things will be different.

This time, he saves the day and himself, killing the angry gangster. He flees the bar with the two women and leaves the drunk father and the tired gangster to each other. More heroics and panics ensue until the three young people end up in the belly of a whale with an old man. There, they have no other choice but to love, live, laugh and pursue the culinary, comic book and performing arts. Eventually, they attempt an escape through the whale’s mouth.

Before all this, the movie begins with a sequence of brief scenes. Some of it is familiar, but most is not. We can make out some “old footage” of westerners arriving from the sky with Astro Boy there to confront them. There is also a familiar 70 disco scene, a little boy getting a watch for a present, a beautiful young woman racing for the subway. Watching these scenes move by so quickly makes you feel a little bit like a confused and passive observer - observing things you don't yet understand.

After the main story, we see this sequence again. Now we are familiar with most of the footage, the unfamiliar parts were from the story, some representing the characters’ earlier choices. There is also some new footage of the many possible futures for the characters.

I think the movie can be understood in lots of different ways. But for me, it told one of my favourite stories: The story about how maybe a person can slip back into the recent past and stop a terrible thing from happening - only to then learn that time is real and the past can't be changed.

I’m not sure if this is an old story (told repeatedly by humans to themselves as they see some terrible event of their present turn into unchangeable history) or one that grows specifically out of the meaningless tragedies, missing gods and the puzzling physics of the (mostly) 20th century.

Here, in the beautiful “Mind Game”, it’s a video game fantasy of trying to stop something terrible from happening that has already happened. The movie contains literally shifting perspectives, subjective confusion, jokes about perceptual misunderstandings, a character wondering aloud if video games can be real - if this mind game can be real. It explores the path of being as heroic as you want to be, of saving the day (even a day that has already been written), of winning your love with patience and courage, and even of learning how to be an artist while killing time in the belly of a whale.

The heartbreaking thing about this movie is that it almost seems true.
Posted by Margaux Williamson at 7:00 AM