(I watched this with my friend Sheila Heti late at night in a cabin in the woods. We projected it onto a wall with our make-shift entertainment system. We were under the shared assumption that it was possibly the most entertaining movie that we brought with us. Every 25 minutes or so Sheila would say, “I think maybe I’ve seen this before.”) 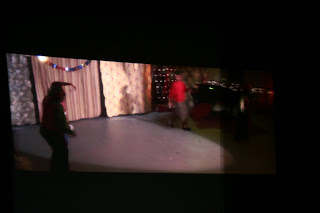 There is a ballet company. The Company is in Chicago. The director wears a yellow scarf. He calls people “baby” or sometimes “genius.” A “genius” comes from Canada to choreograph a new ballet, “The Blue Snake.” There is not enough money to make “The Blue Snake,” but the director (easy and charming) says he will find it. The dancers continue to practice and perform, sometimes in a mirrored studio and sometimes to an audience in the rain. Sometimes new dancers arrive, sometimes dancers quit. Some of the dancers live together in a crowded apartment because maybe they don’t get paid a lot. Ryan is one of the dancers. Ryan lives in a big apartment all alone, maybe because she works a night job as a waitress. One night after her nightshift, she plays pool by herself in a bar. James Franco watches her. He has come to the bar after his nightshift as a chef. He goes back to her apartment with her and makes her an omelet in the morning. Ryan’s family comes out to a lot of her performances. They are clearly supportive if not greatly responsible for her career as a dancer. No one talks much. Sometimes the dancers get injured. When one is injured, another ballet dancer takes his or her place. Ryan is in the spotlight after a few others have suffered injuries. Her spotlight is brief, injuring herself while dancing “The Blue Snake.” She’s okay about it, even smiling, and James Franco crosses the stage awkwardly to give her flowers, while the dancers bow after the performance is done. In the last scene, the dancers come out of the mouth of a giant head and dance around. The head looks wrathful and also a little bit like the company’s director.

The best part of the movie was during The Company’s “Christmas Roast” when the dancers, on a make-shift stage, dress as different members of The Company and act out skits representing scenarios that we have already seen. Although the skits were literal representations, they were loose and playful. It was kind of nice to remember that the dancers, like us, have witnessed the scenarios they were part of. Now they are making fun of one of the romantic dances that happened in a thunderstorm. Now they are making fun of the “genius from Canadia.” It made the rest of the movie seem even more starkly like real life – lacking in poetry and even in .. “representation.”

Failure always seems to be an interesting part of good art. I guess it is easier to fall on your face if you happen to be reaching out far. Some failures are super interesting or easier to forgive than others, like: the bountiful missteps of Marlon Brando; the masterpieces of David Cronenberg that are aiming for the multiplex but end up at the cineforum; the David Lynch-like silence that sometimes follows David Lynch movies; the ambition in Sofia Coppola’s awkwardly revealing “Marie Antoinette” (though to be fair, I didn’t see the end because in the cinema in which I was watching it, the film caught on fire);the incaution in Woody Allen’s one-movie-a-year output (also often awkwardly revealing). Groping and searching and hubris always seem more generous than an immaculate career – more like contributions.

Nothing horrible is revealed in “The Company” other than the fact that it didn’t really work. I am guessing that a movie about an art system is a bigger challenge than a movie about a love affair. I guess at the end of “The Company” we are meant to see the giant head on stage as perhaps the art itself – spitting out dancers with broken bodies or failed or briefly glorious careers. It didn’t really resonate as it was supposed to, but I could see what the movie was maybe going for: art is as a merciless god, barely paying attention to the participants who offer their lives to it — some failing, some falling, some shining.

It’s okay, I think, as I gaze at the hand-painted ballet set, at the wrathful god’s wide-open mouth, projected onto the cottage wall (my friend half asleep beside me): It is only a god of the humans’ creation.
Posted by Margaux Williamson at 1:13 PM