(I had run out of Woody Allen movies to watch. As far as I could see, there was one left, there on the video store shelf, “Whatever Works”. It didn't look good: the prematurely balding Larry David in a “what can you do?” shrug on the cover. Not a trace of pleasure on his face. I had vague memories that a pretty teenager-woman who looks off into outer space was also involved. All one can really think when contemplating the box without much information is, “Please, Woody Allen, please don’t let this movie be about how that man who has a facial expression kind of like yours ends up having sex with a late teenager even though he is initially unwilling.” This is not the kind of story that reliably gets better the more you tell it. The DVD case looked as desirable as a half smoked cigarette on the sidewalk. I picked it up. And when I walked home with it under my arm, confident of a little bit of pleasure, I thought - how bad could it be?) 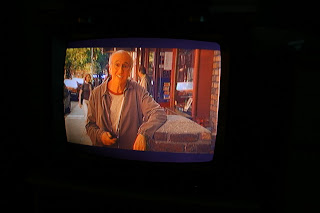 As someone said - don’t judge the performer, judge the performance. But if I judge the Larry David performance in this Woody Allen movie, everyone loses. If I judge the performer, Larry David, then Larry David wins. Who knew? When Larry David is playing Woody Allen, he plays a physicist genius who is wise to (through his superior intellect) the meaninglessness of the human condition - as though, in the 21st century, only a genius (and a physicist??) could entertain a vision of this nature. The meaninglessness that LD as WA has to contend with is epic and profound. He also fights with imbeciles, homophobes and religious fundamentalists. He does his best to cope.

The character's stance as enlightened-nihilist-filled-with-despair seems like it's from another time, like, another time from a long time ago, especially in forced comparison to the Larry David who created Seinfield and Curb Your Enthusiasm, a man who gleefully pours sugar on his meaningless breakfast cereal and rubs his hands together with delight before digging in. When LD is the LD character on Curb Your Enthusiasm, he fights with children, kindly doctors and Ted Danson – all of whom are a little bit smarter and more morally developed than old LD. It is the others who do their best to cope with him while he dances to escape their frustrated clutches and exasperated glares. LD as LD passionately takes up positions on matters of the pettiest nature. His joy in this endeavor cannot be hidden and his pleasure at playing the villain is transparent. Seeing Larry David play the Woody Allen character reminds one that the Woody Allen character is always the hero, no matter how flawed.

Man-impressions aside, the most damning problem regards the old fourth wall. In the opening sequence the LD as WA points out the camera to his dumber-than-him friends and talks about the viewers at home watching them. Of course, no one else can see the camera except for this genius. Now, playing the (now simple) breaking-the-fourth-wall game with LD can make a director look pretty silly. Maybe WA talked directly to the camera while inside a fictional narrative while LD was in diapers (or at least.. um, in business school) but somewhere around 2009, on the set of Curb Your Enthusiasm, near the end of the season, LD as LD strolled past the forth wall and the fifth while whistling a bad tune and waving at Andy Warhol. Andy Warhol didn't wave back. Larry David kept smiling.

Maybe if LD walked around talking about what a genius he was, he wouldn’t have run into a problem like being in this movie and making Woody Allen look bad.
Posted by Margaux Williamson at 12:08 AM