(My friend Lauren Bride invited me to the movies. She suggested “Robin Hood” or “Babies.” We decided on “Robin Hood” because it was summertime. At the theatre, when I saw Russell Crowe’s head on the poster, I was a little disappointed. He always plays the mightiest of virtuous white men, sort of like Doris Day but not as funny and more prone to unwanted and overly serious advice giving. I might have picked “Babies” had I known. How could such a can’t-play-anything-but-a-virtuous-man play Robin Hood? I also somehow made the mistake of picturing the time period being 1990s, and the stage, Hollywood - the time of Kevin Costner and well-laundered cloaks. So I was a little startled when the movie opened in the deep past. I think probably no one else was startled. Throughout the movie, Lauren and I whispered jokes to each other. When we walked home, we didn’t mention the movie. We talked about other things.) 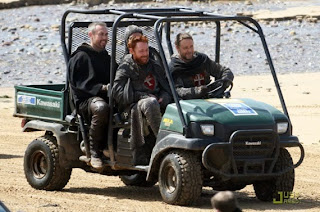 I had no thoughts about this movie – other than an attempt at historical accuracy and a grittier aesthetic doesn't add much to this big story that keeps collectively getting better (this movie excepted) 600 years after its origin. Also, it's a war movie (?) starring a virtuous and victorious Russell Crowe (?).

But a month later, on an airplane, after reading an article on perceptual illusions, I fell asleep and had a dream that David Foster Wallace and Russell Crowe were on a panel together. Russell Crowe had his Robin Hood outfit on and his hat in his hands. He looked nervous. He had lost some weight and was finally sweating in all the wrong places. He kept looking at David Foster Wallace, and then, back at the audience. David Foster Wallace was relaxed and in jeans, looking out into the seated crowd. Neither of them were talking. The less they talked, the more nervous Russell Crowe got. Russell Crowe wanted to defend himself, to tell people he was a virtuous and good man, but no one was asking any questions. We all just sat there. It was different from that time I saw Russell Crowe on Oprah, when he gave her a book for her Oprah’s book club, “The Magus”.

If you really want to steal from the rich and give to the poor, it's good to remember that your trial probably won’t come for a long time - if ever. You'll have to be patient with being misunderstood, even by people you love. You may be glorified for the wrong reasons and disrespected at all the right parties. Understanding someone can take a very long time.

But it can be interesting to be misunderstood, and being misunderstood lets you be more flexible. Flexibility is important if you want to be an effective element in the big story rather than the respected author of your own story. It can be really fun to see how much one can affect the big story, becoming any character that proves most useful. And fun to observe what story we all begin to understand collectively.

When I woke up from my David Foster Wallace / Russell Crowe dream, there were a lot of people in line for the airplane washroom in the back and no one in line for the one in first class. A stewardess sent me back when I attempted to go to the one in first class, rolling her eyes at this move that had been tried a million times before. Sometimes it's harder to change the big story than to be a hero of your own making.
Posted by Margaux Williamson at 11:18 AM