Oldboy (2003) – directed by Chan-wook Park, based on the Japanese manga of the same name written by Nobuaki Minegishi and Garon Tsuchiya


(My friend Sean Dixon asked me if I was interested in reviewing Chan-wood Park’s celebrated movie Oldboy for his “Revenge Night” – an event involving songs, tales and plays on the theme of revenge to launch his new book “The Many Revenges of Kip Flynn”. I had been meaning to watch Oldboy for 7 years, so I said yes. I’ve been out of town, and couldn’t make it to the launch, so I recorded my review on video and sent it in. The original text is below.) 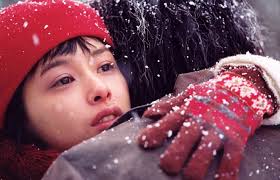 Oldboy is a celebrated Korean movie about revenge. At its heart there is imaginative violence, heartbreaking mind games, two middle-aged men, incest and high school - a live octopus is eaten, a man has only a television for company for 15 years, people lose their tongues.

The first middle-aged man we meet is Oh Dae-su. We meet him right before and right after he was anonymously snatched up and locked away in one room for 15 years. Beforehand, he just looks like a schmuck. Afterwards, he looks like a criminal.

During the 15 years, he has no contact with others. His food comes through a slot under the door. If the sheets need changing or an attempted-suicide-wound needs mending, a gas will fill the room and knock Oh Dae-su out. He always wakes up the next morning, alive in bed. He learns how to fight by watching television and pretending. He fills four notebooks with all the slights and evils he may have committed against others – in hopes to discover who would have the motive to punish him. He becomes incoherent with anger, but a poster on the wall reminds him to laugh. He does. And when he does, he looks like a scary clown.

Right before this imprisonment, we see Oh Dae-su get drunk and miss his little daughter’s birthday. 15 years later, having been released from his prison as mysteriously as he entered, we see him decide to first seek revenge and then maybe find his daughter. We can see that sure, he probably did something horrible to someone at some point in his life.

After Oh Dae-su’s release, Woo-jin, his anonymous tormentor, finally makes himself known to Oh Dae-su. He asks Oh Dae-su to discover what his motives were for punishing Oh Dae-su.

Woo-jin is a beautiful, refined man who was once capable of a great love. He seems more like a prince than a villain even though he now has a chauffer, a penthouse and an artificial heart.

It’s around this point when we learn what Oh Dae-su’s original “wrong” against Woo-jin was. The movie is not yet half way over (things will continue to get stranger) and I’m not even giving anything away to say: it is this smallness – the actual harmlessness of Oh Dae-su’s original “wrong” that is so surprising. It’s a wild and unsatisfying imbalance to all of the violence that we have already witnessed.

It made me think of “The Princess and the Pea”, another story that has a wild imbalance between complaint and origin. A princess has a restless and painful night when a single pea is placed underneath the 20 mattresses where she sleeps. In this story, we already knew about the pea. It was the outsized reaction from the princess that was so funny, even as this intolerance confirmed her true royal nature.

And true too for Woo-jin’s delicate nature, the years and years of distance between Oh Dae-su’s first “wrong” and Woo-jin’s heartache only have seemed to increased his pain and made him more beautiful – more princely – his penthouse is a palace, his clothes are immaculate, his brow is troubled just so. But he is much harder to laugh at than the princess of the pea. We have come too far with Woo-jin and have empathized too easily with his genuine heartache – while knowing that Oh Dae-su is no worthy victim of revenge.

Like wishing a terrible error away, here (after already so much violence) we wish regressively for Oh Dae-su’s first wrong to have been substantial and cruel – to have been made with horrible intentions, to be as monumental as Woo-jin’s reaction. Even if only to justify Oh Dae-su’s horrible suffering.

It is only human to make the mistake of thinking that our own pain comes from an equal and opposite force – or to assume that our own punishments are worthy. It is confusing and arbitrary when our sleeps are greatly disturbed by… not much of anything, when we discover that the source of our mountain of trouble is only a pebble.

As the movie continues with its imaginative violence and mind games between a broken prince and a lost everyman, we wish, again regressively, that Woo-jin would have chosen for his revenge, instead, all of society - an unforgiving, conservative, and sexist society, the thing more to blame for Woo-jin’s suffering than anything else. As an origin story for a villain, Woo-jin being the great and sensitive villain, it would have been epic, deeply satisfying and even logical. But in Oldboy we are suddenly and unexpectedly on a path of stubborn realism, and taking on all of society is quite a lot for just one person.

So instead of laughing or finding real justice, we descend with these characters into the confusion and meaninglessness of their war. We move further away from the spectacular inventiveness and satisfaction of a revenge genre movie and closer towards the dull familiarity of real life and its most common tragedies. The more satisfying stories we like to hear or tell ourselves are built with less human error.

In Oldboy, as real life increases, Woo-jin, having blamed just one thoughtless schmuck for all these years, starts to look a lot less like a prince and a lot more like an ordinary man with a mountain of pain and some very bad defense mechanisms. It is the arbitrary roots of suffering and the meaninglessness of violence that feels so familiar and follows us home.

Posted by Margaux Williamson at 11:58 AM