(My friend Amy C Lam sent me a link to a download of this movie. She was in The Netherlands when she sent it but I don’t know if that has anything to do with it. She said it was made with ten thousand dollars and was “all kinds of reality”. I watched about ten minutes on my computer, then downloaded it to my television where I watched the whole thing. I fast-forwarded through some of the initial driving scenes out of impatience. I fast-forwarded the Karaoke-esque dancing scene, and the making-out in their underwear scene out of discomfort. Once the digital and angry American eagles came, I didn’t fast-forward anything.) 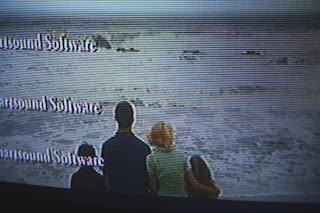 Ok, so you only have ten thousand dollars and you’re going to make a movie. One way to go is the “Incredibly Resourceful and Innovative” route. Like, there’s Jean Cocteau’s "Orpheus" that employs a lot of Parisian eye trickery, the kind of no-money-lots-of-art special effects that convincingly show a lady from the "other side" walking out of a mirror (that's actually a pool) and Orpheus walking out of hell (hell being the film projection of an earlier take).

Another way to go is the “Think Big, Pay Very Little” method, acquiring absolutely all the things that a high budget movie has, but just have them be very low quality. If you go with this method, you might as well go all out and use one of the best movies of all time – like Hitchcock’s “The Birds” as a cinematic starting point (and point of comparison), and throw in a strong environmentalist message.

There is a brown haired man. He is a bit stiff and can’t dance. We think maybe he is popular but not conceited, but for sure he doesn’t think only about sex like some men. He was in computer software developing, but then turned to sales. Today, he made his biggest sale. It was for one million dollars. He is feeling good. On the street he runs into a blond fashion model. They went to high school together but she doesn’t remember. She has to go – she is on her way to a fashion model audition. It looks like they’re in a really small town, so we wonder what kind of audition this is, but maybe they are in Los Angeles. She is a fashion model, but her mother would like her to have a back-up plan, like real-estate agent. The brunette and the blond go on a date. The date is like being at a wedding and listening to a small town fashion model and computer software salesman talk about what they want out of life. Sometimes we can see how interesting they are to each other because it is like the entire background is blurred out and the only sharp thing is them. The brunette goes back to work and thinks about how to do innovative green business. The brunette then goes home and buys solar panels for his house for nineteen thousand dollars. It turns out the blond’s best friend and the brunette’s best friend are also dating. No one is surprised by this, after all, it is a small world. They all go on a double date. For the double date they see “An Inconvenient Truth”. The best-friend couple have sex afterwards. They are always having sex. The brunette is introduced to the blond's mother. It is like we are at that wedding again. Then, there is another date, this one is out of town at the Art & Pumpkin Festival. It turns out that the brunette is not only interested in the blond’s looks and that the blond is not only interested in the brunette’s money. This is where we watch the man and the woman make out in their underpants.

After that happens, digital eagles start banging against their motel window. The blond and brunette wait there till it stops. Then they run to another motel room next to theirs where another man and woman stand. The tall man in this room happens to be wearing army fatigue pants and has a machine gun. The women smile friendly at each other. The brunette explains that they need help getting out of there cause the eagles are crazy and he can’t find his car keys. They all leave together in a van. After that, it gets interesting.

For example:
“I couldn’t handle fighting in Iraq anymore. Why can’t we just give peace a chance?”
“I have to go now, it sounds like a mountain lion is coming. You should go too”
“Are you saying global warming is causing the eagles to go crazy?” A: “I’m a scientist, I can’t speculate but.. (7 minute speech)…”.

I don’t know what was happening in the head of the person who made this. I don’t know if it’s supposed to be funny or if it’s supposed to be serious... or what. But besides my inability to comprehend the intentions of the director, and besides the fact that it’s kind of a horror movie, Birdemic somehow made me feel good. It’s also very relaxing, especially when the angry birds come. It’s a rare example of how the “Think Big, Pay Very Little” method can really make you contemplate why people make things. And that sometimes that method can even create meaning and give you a whole new kind of feeling.

The intentions of a director and the specific creative context of a movie's production have always been hard to puzzle out. And now, with the increasing accessibility of movie-making tools, the increasing plethora of moving images, and the ever multiplying moving-image-viewing-stations, it makes the "identifying a director's intentions and creative context game" a harder game to win. Seeing value or meaning in anything is sometimes rare – sometimes that is good enough.

If this movie was presented at a museum it should be looped on four different screens all playing at different stages of the movie. There, I think an audience would, for the most part, be drawn to contemplating the nature of what acting is, why people makes things, what normal is, what it means to be part of "reality", and the challenges and rewards of bringing politics into “entertainment”.
Posted by Margaux Williamson at 7:20 AM